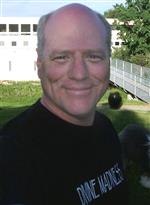 As a teenager, Hall of Fame inductee David Kean developed an interest in electronic music, no surprise since both of Kean’s parents were musicians and he had received musical training and played in various bands throughout his youth. What might be a surprise was just how far this 1975 Raytown High School graduate’s interest in music has taken him in his career.

After collecting keyboards and synthesizers for many years, Kean incorporated with four other music aficionados to form The Audities Foundation, a non-profit public benefit corporation promoting awareness and understanding of electronic music, providing advice to electronic musical instrument designers and the teaching and recording of electronic music. Those unidentifiable instruments on sound tracks are likely ones Kean can identify and perhaps even owns.

Recently Kean has served as a lecturer and a museum curator. Artists like Smashing Pumpkins and Tom Petty and the Heartbreakers have recorded tracks in Kean’s studio. David Kean’s nomination form describes him as “a man with vision who knows how to reach goals against the odds”, just the kind of person the Raytown Hall of Fame is happy to induct.